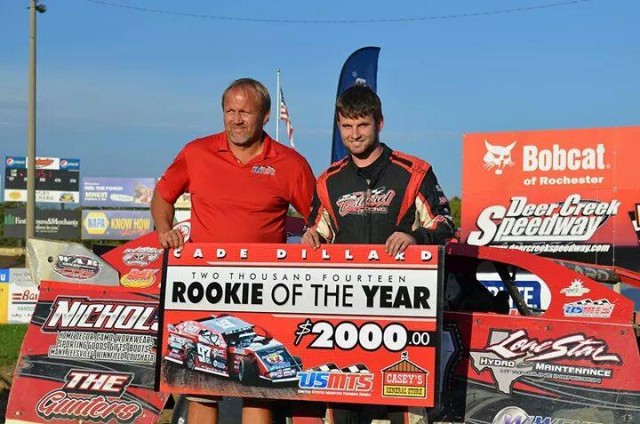 Cade Dillard will be appearing with his racecar at the Nichols in Many during the Nichols 100th Anniversary Celebration on Saturday, Nov 8, 2014 from 9 AM to 12 PM. He will be signing autographs for fans and selling his t-shirts. Come out and visit with Cade and check out his racecar. We look forward to seeing you!

In 2003, at the age of 12, Cade Dillard began his racing career. At that time, the Robeline, LA native, was the youngest driver in the area racing modified stock cars. After his first year behind the wheel of a modified, Cade scored the track championship at his home track, Sabine Motor Speedway. Over the years his passion for racing has grown stronger and stronger. Since the beginning of his racing career just over a decade ago, Cade has raced at over 60 tracks across the U.S. and scored over 100 career wins.

On March 9th of this year, Cade Dillard Racing headed west to the dirt track at Texas Motor Speedway. Competing against 95 of the best modifieds in the country, Dillard and his crew knew they would need to have a perfect weekend of racing in order to come out on top. He led wire-to-wire and scored the biggest win of his career becoming the 2014 World Dirt Track Champion. He was also crowned as the 2014 USMTS Rookie of the Year in September 2014.

Cade recently teamed up with Chris Brown of Cleveland, TX to pilot the house car for LG21 racecars. Such opportunities like this don’t come around often. He considers this a huge privilege to have this chance to showcase his talent. Dillard has a resume that most 25 year veterans would be proud to have. For someone so young, with his drive and talent, he is not afraid to take his show on the road and go up against the best racers. If his past is any indication of his future, it is safe to say the name Cade Dillard will be very popular in the world of dirt track racing for many years to come.

Cade would like to congratulate Debbie Nichols and Nichols stores on their 100th Anniversary. Winning 100 career races is more than anyone could imagine but to celebrate 100 years in business is a major accomplishment! It is a milestone that Debbie and her crew should be proud to celebrate. Dillard is very grateful to have the opportunity to advertise Nichols on the side of his #97 machine! It takes great supporters like Nichols to keep racing teams like Dillard’s on the road. Cade Dillard Racing would also like to thank his other local sponsors, Fox’s Pizza Den, Scotty Carnline Electric, NAPA Auto Parts, as well as his parents, Greg and Pam Dillard, The Gunters and Tyler Roark.

We use cookies on our website to give you the most relevant experience by remembering your preferences and repeat visits. By clicking “Accept All”, you consent to the use of ALL the cookies. However, you may visit "Cookie Settings" to provide a controlled consent.
Cookie SettingsAccept All
Manage consent

This website uses cookies to improve your experience while you navigate through the website. Out of these, the cookies that are categorized as necessary are stored on your browser as they are essential for the working of basic functionalities of the website. We also use third-party cookies that help us analyze and understand how you use this website. These cookies will be stored in your browser only with your consent. You also have the option to opt-out of these cookies. But opting out of some of these cookies may affect your browsing experience.
Necessary Always Enabled
Necessary cookies are absolutely essential for the website to function properly. These cookies ensure basic functionalities and security features of the website, anonymously.
Functional
Functional cookies help to perform certain functionalities like sharing the content of the website on social media platforms, collect feedbacks, and other third-party features.
Performance
Performance cookies are used to understand and analyze the key performance indexes of the website which helps in delivering a better user experience for the visitors.
Analytics
Analytical cookies are used to understand how visitors interact with the website. These cookies help provide information on metrics the number of visitors, bounce rate, traffic source, etc.
Advertisement
Advertisement cookies are used to provide visitors with relevant ads and marketing campaigns. These cookies track visitors across websites and collect information to provide customized ads.
Others
Other uncategorized cookies are those that are being analyzed and have not been classified into a category as yet.
SAVE & ACCEPT